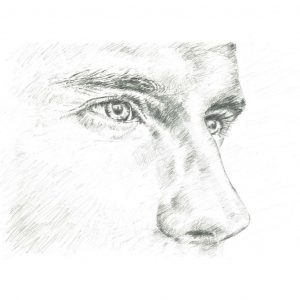 Alistair, aged 58, suffered a significant nasal injury in his teens and had a flat (saddle) nose during his adult years. In his 30s he underwent augmentation nasal reconstruction using a silicone implant. Whilst this performed reasonably well for some years, it subsequently became loose, changed the appearance of his nose, and threatened to extrude through the skin of the nose.

Sensibly, Alistair took matters into his own hands and sought a range of opinions regarding definitive nasal reconstruction. It was clear that without the implant in place his nose would collapse as his nose had, by this stage, no intrinsic support structure of its own. It was arranged that a major rib cartilage graft nasal reconstruction would be undertaken with a view to restoring Alistair’s ability to breathe and re-establishing a strong masculine nasal contour with preservation of the nasal skin intact. Alistair’s surgery was uneventful and he has made an excellent recovery. He can now breathe well and feels entirely comfortable with his facial appearance and his nasal proportions.

Alistair’s prompt action and the ability to operate quickly saved the skin around his nose from damage due to the extruding displaced implant and meant that a masculine nose could be created in a safe and durable fashion.