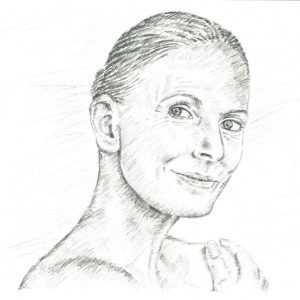 Claire, aged 59, was looking for a face lift to improve her jowls and upper neck.

Claire underwent facelift surgery 10 years previously in the north of England. Having moved further south a few years ago, she wished for further rejuvenation to improve her neck in the run up to her 60th birthday.

Claire had had numerous Botox and facial filler treatments from aesthetic practitioners, resulting in a slightly overfilled look. Correction of her jowls and upper neck was the principal goal of her surgery but Mr. Gore discussed with her the nature of artificial fillers and instead how transferring some of her own fat could be used to harmonise the appearance of her face without the artificial requirements of “off-the-shelf” fillers.

A bespoke combination of revision facelift, structural fat grafting and a lateral browlift was undertaken which has refreshed Claire’s appearance, maintaining a natural appearance, and highlighting her wonderful facial bone structure. Claire finds her scars are neatly hidden and her scalp scar from her previous surgery has been improved so that wearing her hair up is now possible.

The power of natural tissue grafting and sympathetic lifting of the jowls have helped Claire immensely and in combination with her assiduous approach to skincare, this surgery has resulted in a wonderful appearance at the age of 60 which many women of her age aspire to.