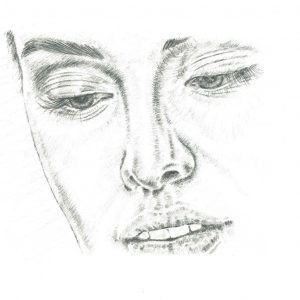 Deborah, 54, had had a large vascular tumour removed from the centre of her face, overlying her nasal tip and bridge. This had previously been reconstructed with a skin graft which had resulted in a dip in her nasal tissues where the tumour had been.

Deborah was very self-conscious about this and was keen to improve her appearance by secondary reconstruction. Following detailed discussions and assessments it was agreed that only by reconstructing all of the central sections of the nose could a smooth nasal outcome be assured. Deborah proceeded with a multistage forehead flap reconstruction which has resulted in a smooth nose where it is now hard to see the scars from her surgery. Some months later, further correction was undertaken in the region of Deborah’s brow which resulted in yet greater facial symmetry.

This complex reconstructive surgery has transformed her life for the better and she is much less self-conscious when facing the general public.