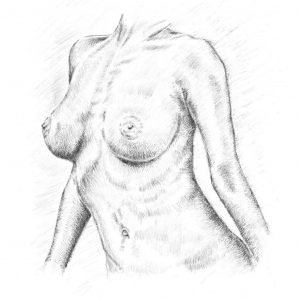 Lucy, aged 25, initially came to talk to Mr Gore about breast augmentation surgery following the effects of pregnancy. Having had two children her body had changed and her breasts had altered both in terms of volume and shape.

Lucy was an insulin-dependent diabetic and so it was very important to put this surgery in the context of her general health and to optimise the management of her diabetes before undergoing an operation. Due to the nature of Lucy’s diabetic care, she also had excess tissue in her abdominal region and, rather than breast implants, discussions turned to harmonising her body balance between her breasts and her tummy. Lucy elected to proceed with abdominoplasty and breast augmentation surgery in a single operation.

Lucy is a fantastic example of engagement in the process of undergoing surgery with a medical history that demanded a bespoke approach and coordination with other specialists. She is to be congratulated on her contribution to the outcome of her surgery and her improved diabetic control that has resulted from this.