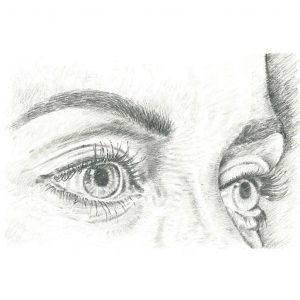 Virginia, 72, had suffered from skin cancers on her face previously and now had a suspicious lesion on her eyelid. Previous surgical treatment had left her right lower eyelid tighter and lower than it should have been. An additional crusty lesion on her right lower eyelid was shown to be a squamous cell carcinoma and surgical treatment was discussed as the only meaningful way of removing this and not affecting her eye.

After removing the cancer, a hybrid lower blepharoplasty skin flap reconstruction was designed to facilitate not only optimal healing but also correction of Virginia’s previously misshapen eyelid.

This has resulted in imperceptible scars, a completely removed skin tumour and normalisation of her eyelids with better symmetry than was the case before her surgery with Mr. Gore.